I have one of the old iPads without a camera and with not much memory (probably almost antique in technological terms) but I love it. I even chatted someone up on a flight to Gatwick because he was using one. I remember asking him what it was as I’d never seen one before. ‘It’s an iPad,’ the man, who turned out to be a writer and journalist and, subsequently, a good friend, replied, handing it over to me. ‘I want one,’ I said. I bought one almost as soon as I landed and have used it every day for almost four years.

I had thought about using it with little Leo but he didn’t seem that interested and I didn’t think of looking up toddler apps. But I finally had the bright idea before we went to Tenerife in December thinking that it may help on the plane. But Leo decided it was much more fun trying to kick the chair in front, wriggle free from the seat belt and then chat up everyone on the plane (I, at least, was more selective). However, since January I’ve slowly introduced Leo to several apps. At 19 months old ‘Ipa!’ has now become his second most used word after ‘tea’. 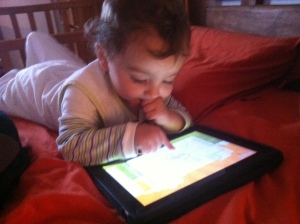 I began with ‘Little Town’ by Wonderkind. This is a detailed and intricately designed animation of a scene in a town in the morning with an open view into apartments. You (I mean the toddler) can tap on various scenes including people cleaning their teeth, a dog eating the toast, a bear playing the piano, a man ironing. Outside in the street you (and/or the toddler) can tap on a helicopter, a motorbike, a bus, a man walking a dog, some birds, the traffic lights. By tapping you initiate a mini scene. Within days I could ask Leo to tap on the window of the woman waving, the man walking his dog, and all the other activities. His understanding tripled daily. There are also scenes ‘In the afternoon’ (in the park) and ‘In the evening’ (in a town square) and, by the same company, ‘My Animals’. I also downloaded lots of transport apps and puzzles, interactive nursery rhymes and music apps. ‘Animals for Toddlers’ is another favourite. (Unfortunately many of the apps that speak don’t know how to say ‘zebra’ but a minor fault).

A couple of weeks ago, Paul, Leo and I went out to a local restaurant in Marmelete. All the old people were gathered round a log fire drinking medronho and watching football – Manchester versus Barcelona. Leo kneeled on the chair and I tool out the iPad and we did some car puzzles while I de-stoned olives. For the first time ever we all managed to eat at almost the same time. Leo calmly ate bread, olives and cheese and then shared my omelette while we tapped on fish in the sea and jumped at a killer whale shooting out of an icy sea.

Most of the time I sit with him, help him with some of the puzzles and games like ‘The odd one out’ and memory games finding pairs in cards (difficult). We cosy up on the bed first thing in the morning and before his afternoon sleep and at nighttime. It has become a special time for us and we iPa for twenty minutes or so.

A couple of times I have left him on the bed on his own playing while I make tea, or put the washing in the washing machine, or light the fire. These are small miracles to me. It normally takes me half an hour to put the washing in as Leo is taking it out, mixing in the cat food, or climbing on a chair and trying to reach the detergent, ‘Da, da, da’. Or simply emptying the cupboards of everything.

It was only when Leo wouldn’t go to sleep without clutching the iPad that I began to get slightly worried. I did a search online for babies-ipad-addiction and the first article I came across declared that a four-year-old needed therapy to get off the iPad.

Dr Graham said that young technology addicts experienced the same withdrawal symptoms as alcoholics or heroin addicts, when the device was taken away.’  http://www.telegraph.co.uk/technology/10008707/Toddlers-becoming-so-addicted-to-iPads-they-require-therapy.html

Oh no. My heart sank. I know alcoholism. Did that mean that I would have to cut out our quiet, shared moments? No more washing without cat food in the clothes?

But then I thought again. Rubbish. As with all technology it is how you use it that’s important. Of course it’s not good to plonk a baby or toddler in front of an iPad for five hours a day (now there’s an idea…), or, really, to sleep with it. But we spend so much time outside playing in streams (‘Tea! Tea!’) and walking in the forests and mountains it is good to have an indoor balance. And it’s fun and informative. I can even point out things that we have learned from iPa. ‘Look, Leo, there’s a woodpecker! A  frog. Well, a squashed one. A waterfall. And, today, ‘Look, Leo, there’s a wild boar eating the neighbours’ vegetables… Let’s walk back. Slowly.’ And yesterday he wanted to sleep with his new shoes during the day. Today he wanted an orange that we picked from a tree in the garden.

I check on him. He is still clutching the orange. Now where is my iPa…

About the middle of October 2013 I received an email from my father in Greece. ‘Happened to mention your website to friends here and saw that your site is now advertising male dysfunctional disorders …’ What?! My father must have hit the ouzo again. I looked online at my site (something I hadn’t done for a while) and, sure enough, there on the homepage was a link to buy Viagra. Hm, someone had clearly hacked my site and put that on. I remembered then that I hadn’t received emails from that account lisaselvidge.com since, I checked, July. I’d written to Streamline.net, my hosting service, about this but I had received an answer I hadn’t understood – something about needing to change the DNS…

I wasn’t too worried: I would just load up the homepage again. But I didn’t have time to do anything about it until I finished teaching in December. Then I spent a couple of days updating the site but I couldn’t load it up. Hm. I contacted Streamline.net again. And then began to unravel a sticky roll of strange events which I’m still ungluing. I discovered that my domain name, lisaselvidge.com had been due for renewal in August 2013. Unfortunately, I received no notification. In the past I had always renewed the domain through Direct Debit through, again, Streamline. I bought the domain from them almost ten years ago but the registrar was Tucows for some reason. Now it had passed to Hover and was being hosted by a Russian hosting service Echo-Host.com. It may have just been an admin error and I simply didn’t receive the notification for renewal but because I lost access to the email first I suspect my website was hacked, sold and moved to another hosting service. Apparently, once a hacker has the main email address (and they can easily ask for a new password) and you fail to renew your domain they can easily take control. When the domain is not renewed it will go to auction and be sold. Whatever happened no one will take responsibility and Hover have contacted the new owners of my site but they will not sell it back to me. I do not know who ‘they’ are.

Strange. It is/was such a personal and handmade site I can’t imagine that it would be good to anyone other than me. But I’d be interested to know how the Viagra sales go. Better than books?!

A warning to everyone – keep control of your domain and if anyone uses Streamline.net I would be very careful. In the meantime, I will try to get a new site up and running. It badly needed upgrading anyway so thanks to whoever did it and good luck with the Viagra sales.