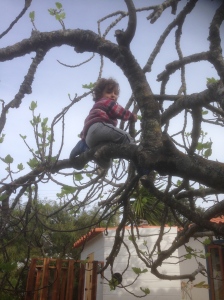 Leo refusing to stay with the neighbour.

‘I found discipline the hardest thing,’ said a friend of mine in Monchique when Leo was still bobbing up and down on my back.

Discipline reminded me of Japan – regimented lines of children, armies of indistinguishable salary men, robots, trains. Of course discipline was important but I also believed in questioning, creativity and individuality. I wasn’t too worried about it. After all I’d taught in institutions for twenty years. I believed I could set a good example. I considered myself open and liberal – I’d danced on tables and shouted at people I believed to be wrong. But I could also be firm and I did not like bad behaviour in children.

Everyone had an opinion about discipline.

‘You must never smack children – it’s not right. We are being bullies.’ I agreed: I would never smack a child.

‘My father used to smack me. I deserved it.’ Really?

‘My grandson is so good. I tell him not to do something and he doesn’t.’

That got me. I had told Leo not to empty the cupboards out, not to flood the bathroom floor, not to throw things, not to spit food out, not to climb on the table, not to rummage through the rubbish, to be gentle and not break things and not to pull my hair a thousand times. I have guided him away. Sometimes, it seemed, to little avail.

One warm winter’s Sunday, when Leo was about 18 months old, we went to a restaurant in the main square in Ferragudo for lunch. They had some nylon burgundy table cloths on aluminium tables, not clipped on. The first thing Leo did was tug and watch with joy as the wine-red sail slid off. I picked it up and folded it up. The waitress came over. I explained what happened. ‘He’ll only pull it off again, it slides off really easily,’ I explained. She went away frowning, then came back with two sparkling glasses of vinho verde.

‘You must have the table cloth on,’ she said, flapping it open.

‘Oh,’ I said. ‘But Leo might pull it off and the wine with it. Then they’ll be glass everywhere!’

‘Okay,’ I said. ‘We will drink the drinks and go somewhere else for lunch.’

I went to pay. The owner, a very grumpy man, Dutch, I think, guarded the bar and till.

‘This my house,’ he said. ‘Would you like if I come to your house and start moving the tables? Hey? Have respect.’

‘I appreciate that,’ I said. ‘But he’s a baby. He will grab things and I don’t want to be walking around with him the whole time.’

‘You make him sit still and not touch things. You must discipline. If he won’t learn now, he end up in prison. And there he will learn.’ He was shouting at me by now.

Make a baby of eighteen months not touch anything? I would have to handcuff him. We left and went to eat in a restaurant on the beach without table cloths and a lovely waitress who gave Leo a big hug and Leo gave her a kiss.

I spent my days worrying about what is good behaviour in young children. I concluded that as long as they’re not hurting themselves or someone or something else then the rest is subjective and culturally conditioned. That said, of course I did not like ‘bad’ behaviour and wanted Leo to do as I asked – assuming I could rationally explain why – so I needed a model and to be consistent. I spent my nights looking up discipline on mumsnet and babycentre.com. Everyone seemed to recommend ‘time out’. The idea is that the child is left on his own to consider what he has done. Some see it as punishment, others as more of a time for reflection. However, when I put Leo in his cot and explained that he needed to stay there as he had painted the table and not the paper and I had asked him not to, he climbed out again and started running round the room. He didn’t get it. He was too young. One evening, exhausted after trying to get him dressed for ten minutes and failing because he was jumping all over the bed and throwing his clothes everywhere, I grabbed him and smacked him on his bottom. He cried. I got him dressed. I didn’t know what else I could have done at that moment. I explained that but I knew I needed to find another way. 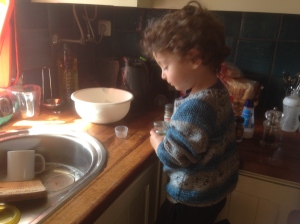 Experimenting or making a mess?

I talked to a friend who trained as a paediatrician and also had a little boy. She told me to hold him on my knee as he would have the security and warmth yet lose his liberty – which he would hate. She said she counts to ten to warn against consequences of touching or whatever it is they are not supposed to do. And the advantage is that you can do it anywhere rather than having to ruin your nice day on the beach with threats of going home. I tried it with some success – as well as bruised shins. I also started a book with stickers to reward all the good things – saying ‘please’ and ‘thank you’, eating all dinner up, making Lego ice-creams and cars. Things began to improve.

As from two and a half years the time out begins to work. At least for me. Children are our mirrors and setting a good example is not as easy as I thought. If I’m rested and feeling good I can say, ‘Leo, that is not good behaviour. Now I am going to put you into your bed and you can think about it while I go and clean it up. Think about it, okay.’ Then I come back and I say, ‘Now what should Leo not do.’ ‘Sorry, Mummy, I won’t do it again.’ ‘You won’t do what again?’ ‘I won’t eat the foam in the helmet and spit it out.’ ‘Okay, thank you.’ I will also consider why he’s spitting. Is he full? Is he hungry? Does he have toothache? Or are there other problems of insecurity or conflict? But, if I’m tired and I’ve already cleaned the floor three times that day and every day for the last two and a half years and I’ve asked him not to spit food or foam out and he does, then I am liable to storm around the kitchen with the mop, twirling around like an angry banshee and say something to the effect of, ‘Agghhh! F****** h***, Leo, stop spitting. I’ve already asked you a thousand times…‘ Etc.

Time out is a great way of defusing. I can put Leo in his bedroom while I go and breathe deeply and re-program my reactions.

The other day, Leo looked at me while I was frowning at the mess he had created when I’d just cleared up. I was considering whether this warranted time out. Leo looked at me, gave me a hug and said,

‘Think about it, Mummy, okay.’

My friend was right. Discipline certainly is the hardest thing. But I think I’m getting better.