The rain slashes the jeep, the wind howls, but I know that the ski station is at least another 400 metres higher than Penhas da Saude. Surely it must be snowing there. I open the door and feel the rain whip my face and hands. I tug at Leo’s door and finally the wind lets go. I shove his arms into his ski suit and arc his hood over his head. The wind slams the jeep door back onto my legs.

Gloved and hooded, we scurry into the hotel. Several people hang around outside the sliding doors, red-faced, smoking and looking grim. I bounce up to the reception of the hotel and enthusiastically ask where we can hire skis.

A woman with granite smooth hair looks at me serenely and smiles a cracked smile. I know then that things are not going to go well.

‘It’s obvious that there’s no skiing,’ Paul hisses, sidling up to us.

The receptionist shakes her head.

‘But I thought there were forty snow canons?’

‘But I read that the ski station opened on December 5th?’ I persist. It is now almost the second week of January.

‘No, it hasn’t opened. The temperatures have been too high. No snow.’

I can see, or rather feel, Leo disappearing into a corridor. The receptionist saved from my further claims of improved installations, ski school for children from three and a fun park, I run after Leo.

We stay in a chalet while the wolves howl all night, pounding the roof, growling and scratching at the walls.

‘Mummy, the big bad wolf is trying to get in,’ whispers Leo as I put him to bed.

‘But it’s made of wood, Mummy,’ Leo says, ignoring me.

‘Yes, darling, but not sticks. It’s not going to blow down.’

I spend the night worrying about the fears we put into our children through the stories we tell them while listening to the racket the weather is making. Maybe Leo is right.

The black night lightens to grey but the wind and rain persist.

‘Shall we go and see the ski station?’ offers Paul.

We drive up and into the stone soup that sloshes around the mountains. On and on, up and up. At last we reach a junction and out of the grey I see a spot of orange and a little skier.

‘It’s there,’ I say, pointing. We follow the sign but we are lost again in the clouds. 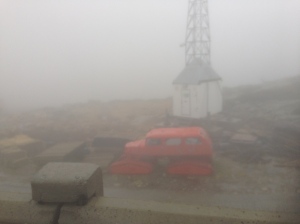 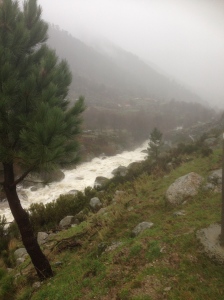 We go back to Tore, the highest point, and are hurled into a cafe. We are the only clients.

I hug my coffee trying not to show my disappointment. I love skiing. I even ran away from my grandfather’s house and college at seventeen, leaving behind an eloquent note ‘I’m pissing off to Switzerland…’ I lived in servant’s quarters and worked cold and mucky twelve hour days with race horses in St. Moritz just so I could have one day off a week to ski. When, in my late twenties, I hurt my knees skiing was out of the question. I didn’t go for fifteen years. Four years ago and 6 weeks pregnant with Leo I spent an afternoon skiing in Sierra de Nevada. Everyone agreed I was crazy to risk such a much wanted pregnancy. But as soon as I pushed myself into the snow, planted a pole and glided round and, again, the other side, I knew it would be all right. I sashayed down the mountain, as happy as a snake skimming dunes in a desert, a silly smile playing on my lips and singing ‘Turn and face the strain, ch-ch-changes…’

‘So shall we go to Manteigas?’ Paul grins. ‘Or the miniature car museum?’

Snow is forecast for the afternoon but the wind and grey clouds won’t let go of the mountain. They hold on tight, shaking and mauling, pissing on it. Another night holding onto the bed, ear plugs jammed in. Leo hugs me.

I know when I wake up. It is quieter. I jump out of bed and run to the window. There it is. Not much. Just a dusting, but small white flakes whirl and curl through the air.

Paul is not impressed. He’s only here because he believes it will not snow. But Leo and I put on our layers and bound out before breakfast. The wind bites our faces and the iced rain slashes us. I haven’t felt this cold for many years. I manage to scrape enough snow together to make a snowball to throw at Leo. Then feel guilty as he can’t make them with his little hands and too big gloves.

‘Later. First we find out if the ski station is open.’

We are the only ones there. The woman looks at me. Again that look of imperturbability.

‘Bom dia,’ I say cheerfully. ‘Any news? Is the ski station open?’

She shakes her head slowly. ‘All the roads are closed.’

‘Yes, The GNR have closed the road.’

‘I don’t know but I don’t think it will be opening today. Maybe tomorrow.’

Later that morning the snow begins to fall. The wind still bullies us but the world outside becomes whiter instead of greyer. Leo flings himself down into the snow. I follow him around grinning happily, my lips chapping, my cheeks reddening. 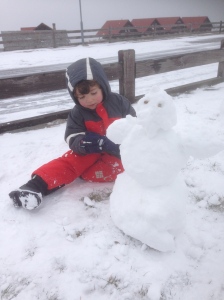 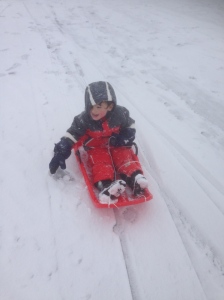 ‘Look! A snow plough!’ Leo is chuffed. ‘And salt lorries. They put salt on the road to melt the snow, you know.’

It amuses me when my knowledge is appropriated.

Leo, Paul and a Russian family make snowmen, film television crews come up to film the white stuff. We buy a plastic sled and Leo and I slide down a little hill. When no one is looking I sneak into the hotel to ask about the ski station. Maybe later, maybe tomorrow.

Later or tomorrow never happen. The snow turns to ice. Then to slush. Then to black water. Then to nothing.

Back home I speak to my friend and neighbour. They are going skiing in Bulgaria for Easter, she tells me. Why don’t we come?

Bulgaria? From Portugal. With Leo on a plane. It was almost impossible but then again…

My eyes shine as the idea begins to root.